Between December 2018 and May 2019, aspiring chefs from Portugal, Spain, Belgium, Poland, France, and Sweden have been battling it out to create new seafood recipes using sustainable species, rather than commonly over-fished species. Supported by the EU-funded SEAFOODTOMORROW project, winners from the six national contests participated in the final competition, which took place on the 1st July at the culinary school - Ferrandi in Paris (FR).

Students and teachers from regional cooking schools were asked to create innovative dishes, using locally-sourced, sustainable seafood species, which cater specifically to dietary needs of pregnant women, older people, and children. On a population basis, these groups eat the least fish, but would benefit from the high-quality, easily digested protein and other nutrients (e.g. omega-3 in oily fish).

Entries were judged by a panel of representatives from the seafood and food industry and mass catering companies, as well as chefs and nutritionists. The winning recipes were judged on nutritional value, texture / functionality aspects, and industrial feasibility. Angelika Mantur-Vierendeel was a member of the jury, because of her nutritional expertise and previous experience with helping individuals eat more healthily, as well as her passion for cooking. Two dishes were chosen from each category, which will be adapted for production in restaurants, hotels, and canteens across Europe.

Pictures of the dishes: Pictures of the contestants and the jury: 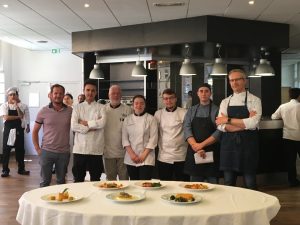 Trackback from your site.

We use cookies on our website to give you the most relevant experience by remembering your preferences and repeat visits. By clicking “Accept”, you consent to the use of ALL the cookies.
ACCEPT
Manage consent

This website uses cookies to improve your experience while you navigate through the website. Out of these, the cookies that are categorized as necessary are stored on your browser as they are essential for the working of basic functionalities of the website. We also use third-party cookies that help us analyze and understand how you use this website. These cookies will be stored in your browser only with your consent. You also have the option to opt-out of these cookies. But opting out of some of these cookies may affect your browsing experience.
Necessary Always Enabled

Any cookies that may not be particularly necessary for the website to function and is used specifically to collect user personal data via analytics, ads, other embedded contents are termed as non-necessary cookies. It is mandatory to procure user consent prior to running these cookies on your website.